Day 2 Arrive in the afternoon.  Have dinner and relax at hotel.

Day 5  Travel south to Eilat on the Red Sea.  Stop at Beit Guvrin and take part in an archaeological dig in the Negev desert.  Stop at Sade-Boker which is the final resting place of David Ben Gurion, first Prime Minister of Israel.

Day 7 Travel north from the Red Sea to the Dead Sea with a stop at Eco Kibbutz Lotan to learn about the desert environment.  Enjoy a late afternoon hike (or ride) up to the top of Masada and a soak in the Dead Sea.

Day 8  Take a hike in Ein Gedi.  Stop in Qumran to see where the Dead Sea Scrolls were found.  Then we will travel to Jerusalem.  Upon arrival, marvel at the ancient Old City from the Mt. of Olives.  Then we will the Hezekia Tunnel.

Day 9  Ramparts Walk on the Old City Walls from Jaffa Gate to Zion Gate where we will enter the Old City.  See King David Tomb and the Last Supper Room.  Tour the Jewish Quarter, see the Temple Mount and the Southern Wall Excavations, visit the Kotel (WesternWall), Lunch in the Old City, and take a 3 religions walking tour of the Old City.  Explore the Muslim and Christian Quarters while passing the Stations of the Cross along the Via Dolorosa to the Church Holy Sepulcher.

Day 11  Tour Ceasarea National Park which are ancient Roman seaside ruins on the coast of Israel.  Have a Druze lunch in Haifa before driving north to Rosh Hanikra on the northern most point of the Israeli shore.  Since this will be the first night of Passover, we plan to have a Seder with the locals (to be arranged).

Day 12  Drive to the Sea of Galilee by going through the Judean Desert, Beit Shean National Park, Baptismal Site at Qasr Al-Yahud, and have a Seder for the first night of Passover.

Day 13  Visit the Christian Sites of Capernaum, Magdala, Tabgha and see then see the Golan Heights stopping at the Mount of Beatitudes.  Then see the ancient city of Nazareth, the Basilica and Grotto of Annunciation Church and the Church of the First Miracle.  Visit Akko, one of the oldest inhabited cities in the world.  Then, we will have a farewell dinner before heading to Tel Aviv for our nighttime flight home.

Day 14  Arrive in New York and continue to your home cities.

*Itinerary and/or hotels may change slightly prior to or during tour.

DUE TO THE COVID-19, WE HAVE POSTPONED THIS

DATES TO BE ANNOUNCED.

After 22 years of traveling the world, Frontier Travel Camp will finally embark on its first trip to the holy land of Israel.  Since we are a non-denominational tour group, our goal is to educate travelers about Israel from the perspective of Jewish, Christian, and Muslim history.  We are fortunate that our tour dates will coincide with the beginning of Passover.  Therefore, we will have a Jewish Seder that those of all religions will be lucky to experience especially while in the Holy Land. 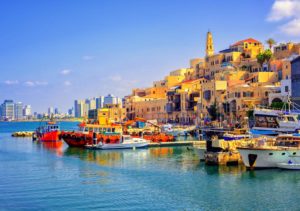 Israel is a unique and special place for all who are fortunate enough to travel there.  We want to assure that our group is extremely safe, learns about the country from all perspectives, and that we have special access to these wonderful destinations we will visit.  This is why we have hired the expertise of one of the most respected tour companies in Israel to handle all of the arrangements of our group from the boutique hotels, coach buses, restaurants, and guides experienced leading groups of all ages with special backgrounds.

Our comprehensive tour will take us to all corners of this small country.  We’ll visit Tel Aviv, the Negev Desert, Eilat on the shores of the Red Sea, Masada, Ein Gedi, the Dead Sea, Jerusalem including the Western Wall and many Christian and Muslim historical sites, Nazareth, the Sea of Galilee, the mystical town of Safed, the beautiful caves of Rosh Hanikra, the splendor of Haifa and it’s Druze neighborhoods, one Akko which is one of the oldest inhabited cities in the world, and the highly impressive coastal Roman city of Caesarea.  We will also visit several Kibbutzim and gain a cultural understanding of communal life.  Of course, there will be so much more than what is listed here.

This tour to Israel will be fully guided by a LOCAL PRIVATE ISRAELI GUIDE recommended by the staff at the JCC Adaptations Program in NYC and Birthright.  This guide has many years of experience with travelers with Autism and other developmental disabilities and has herself guided many groups like ours exclusively in Israel..  This is in addition to the staff provided by Frontier Travel Camp with a 4:1 Ratio PLUS the  Routes Travel staff.

All meals (any special dietary requirements can be arranged), transportation, activities, coach airfare from New York’s JFK airport, and hotel accommodations based on double occupancy.  Single rooms and flight upgrades are available at additional cost.

To Sign up using our new Online Registration form using Campdoc.com use the Blue Button Below.

Sign up for this tour!
« Back to tours page

We specialize in supervised trips for high functioning individuals who want to get out of their normal routine to Make Friends, See the World, Live Life.  Frontier Travel Camp has been guiding trips for over 22 years and has traveled all over the USA, Canada, the Caribbean, Europe, Australia, and Japan.  Our mission is to further the growth and development of our travelers while providing a safe and memorable travel experiences.

Our Summer Tours are All-Inclusive with airfare from New York (unless otherwise stated), staff with a 4:1 ratio, 3 meals per day, ground transportation, and all activities costs.  All tours must have a minimum of 20 people.  Travel Insurance is recommended.

Acceptance into the program is required.  The first step is to complete the Camper Application (linked below).  Please call Frontier Travel Camp at 866-750-CAMP (2267) with any questions.